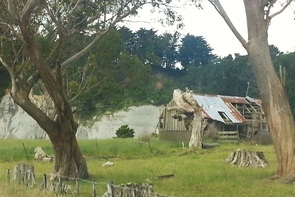 Exploring Wellington & Massey University
The morning we woke up in Brian's he had already left for work.  We took showers and turned the bed over, started sheets washing for him and then took off ourselves.

Our plans for the day involved meeting a friend that Selene knows from online at a flashlight forum named Kane, and his girlfriend was supposedly coming as well.  Unfortunately the timing didn't work out until the evening so we spent much of our day waiting for the meetup.

We decided ultimately to drive around Wellington and look at Massey University since it was a likely candidate for my post-bachelors education.  It turned out that today was the last day that the campus was open so we hurried to meet what professors and councilors were there.  I met with the communication office and scrambled to explain what I was interested in to little avail.

After several hours on the campus and walking along the coasts we decided to meet Kane at the beach side for a brisk walk, get coffee, talk for a while.  The topic of the conversation was mostly how insane American politics, economics, and culture was for our very odd systems and how we handled inequalities.  Kane is actually 1/3rd Maori and went to school on scholarship for it but didn’t quite succeed.  He is currently working at a grocery store and honestly doing alright by himself.  He lives with his girlfriend and together they are able to afford a small house with a few animals.  Regardless though he isn’t particularly interested in politics and spends most of his hobby time online communicating with the rest of the world.
After a few hours of talking with him over coffee on the beach we went to dinner just off of Cuba Street, a common and “hip” area in Wellington.  It was a sight to see really as the area was a food court with hundreds of venders stuck in a small alley way kind of place.  I felt like I was in a burning man food court.  After eating we met up with Kaitlyn, Kane’s partner.  We talked for several hours and the flashlights came out (Selene and Kane met on a flashlight forum for which Kaitlyn and I have no interest so we essentially talked amongst ourselves). Kane and Kaitlyn spoke with us at length about a lot of the issues faced in New Zealand that are “behind the scenes” including its huge environmental issue.  Apparently the Cows and Dairy are creating a lot of overgrazing issues in New Zealand while also contributing one hell of a carbon footprint but they are better for the farmers as they bring in more money.  The sheep simply aren’t cutting it for farmers but many Asian conglomerates are moving in and doing more industrial farming which is taking money from the farmers making the small towns largely struggle and in the meantime it is causing a huge ethnic diversity issue for the European pakeha and the Pacifika.  Most of Auckland was Asian but most of the south island is white.  According to Kane there isn’t much for racial discrimination here but there is definite inequality in the system that he witnessed himself trying to go to college. That said though he does pass as white so he doesn’t face this much.  That said however the economy and class issues are still widely apparent for them.  The concentration of the wealth is getting higher and higher in class and the cities and feel it but they are still voting for higher class because they’re supposedly doing a good job.  Their political parties are splitting up and splintering from each other as well.
We got off of the world based topics and began to focus on them personally – their life and such.  They both work in retail and at grocery stores and the two of them have to work to maintain a home but they can live comfortably when they are working on it together so this is a helpful thing for them.
After a bit Kaitlyn and Kane suggested we take the dog for a walk so we took a night walk up and down the rose garden and talked about various things like flashlights, different cultural phrases used in countries, the prevalence of curse words in the area, and whatnot.   We spoke of games in America vs. New Zealand, and how America tends to be much more overtly sarcastic.   The gorgeous views of the garden were amazing.  Regardless though I was not feeling very well.  I felt like I needed to puke and I really needed to release my bowels as I have been having a lot of problems of late (you know, travel and all).  The garden was a bit cut short as a result.  They kept us up for the night and will keep us up for tonight as well so that is very helpful.