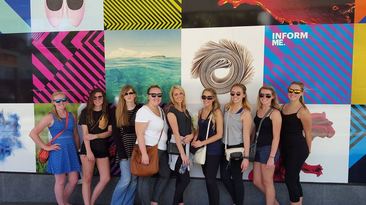 All of us on our way to Radio NZ passing by the
New Zealand Herald building. (image credit: Pete Seel)
TVNZ, RNZ, and Pansy Duncan
Today was mostly a day to tour the media companies TVNZ and Radio New Zealand (RNZ).  TVNZ involved a typical tour of the station.  They discussed social media which contrasted sharply with RNZ.  TVNZ still uses social media as a one way broadcast model for television while RNZ has recently launched a YouTube "video podcast" program to involve listeners in the studio itself.  At Radio New Zealand we met Noelle McCarthy who was live on the radio at that time.  Given the importance of social media for most organization's it seems to me that RNZ was more malleable in regards to the future.

Later that evening we met with Pansy Duncan, a media scholar, at our hotel to discuss media studies and comedy in New Zealand.  Pansy specializes in analyzing kiwi (New Zealander) media and communication models.  She used several New Zealand comedies, most notably Flight of the Concords, and What we Do in the Shadows to illustrate how kiwi comedy tents to be self-deprecating and relies on awkwardness or embarrassment in comedy rather than outright boisterous humor like some would view American humor.

Shortly after Pansy left it was time to go out on the town.  It was my birthday but I couldn’t well find a place to spend it.  We headed out to Ponsonby with the rest of the class and I had a cultural experience I won’t soon forget at all….

Ponsonby Road and The Problem of the Chapel
The environment of an establishment is known for setting the kind of audience and culture it attracts and this one, I could tell, wasn’t good the second I saw their center piece.  (pictured below). 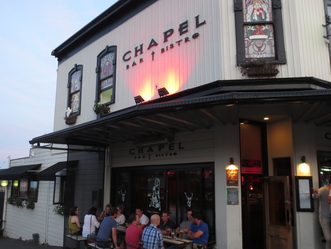 The chapel is a small dive bar tucked into the hill on Ponsonby road with a religious rebel theme.    The bar was packed and it was very difficult to get a seat with 99.9% percent of the bar’s inhabitants being men in casual dress, most in their 40s or so.  One man was wearing a shirt “Paris slept here” eluding to Paris Hilton having slept with him and perversely referencing a marketing T-shirt from Katy Perry. Alcohol was flowing in abundance and women were invariably "preyed" upon in the bar.

As Selene and I walked in holding hands as lesbians and obviously a couple we got hit on in rapid succession by two guys and shots were offered to the other girls immediately (which continued the entire night in severe excess.)  Selene and I found a table as far away from people as possible and several of the girls indulged in the free drinks.

​We had to leave after a about half an hour because Selene and I as transgender women were extremely uncomfortable, but it was very hard for me to leave the other girls there.  The next day stories of the girl’s treatment in the bar included men buying drinks with the express desire of making out and offering pints of beer when they were about to leave.  A good deal of Making-out had happened and it may have been my view but objectification seemed to be dripping from their stories.  Thankfully they returned safely, but I learned a few things..
what I learned FROM THE chapel