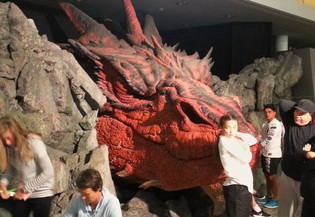 The installation of Smaug in the Wellington Airport, New Zealand.
Melbourne, a city of culture
Starting dark and early at 3 AM we headed to Wellingon’s airport to catch a plane to Melbourne Australia.    Weta Cave had apparently installed a giant Smeagle in one part of the airport and Smaug in another.  they were extremely impressive.

When we landed in Melbourne we were immediately picked up and brought to our rooms just off of Victoria Street, dropped off our stuff and went on a city tour of the town where street art was not only allowed in a few select areas, it was highly encouraged.  One particular alley way was covered in street art, both commissioned and random.
Saying Sorry
While headed back to the hotel after the city walk I was interrupted by a man begging for coins on the streets.  I attempted to give him all the New Zealand coins I had, but I apologized I had no Australian currency yet.   Another man passing by on the street then aloud, “You don’t have to apologize for not having cash for a beggar you know.”

Taken aback by the man and unsure of what to say  I replied, “Yeah I know but in the U.S it’s kind of customary when you can’t help where I come from”.  (I didn't want to get into a gender conversation but most women in the U.S will apologize with any form of no or rejection, me included).  He asked where I come from and we struck up a conversation.  He was an actor who had just returned from Australia after a fairly long role being filmed for a few things in L.A.  He had missed the holidays with his family and returned to Australia now to be with them.

I asked him if he liked Melbourne and if there were any cultural centers he felt weren’t viewed a lot or tourists didn't often see.  He said everywhere you look is culture, just literally everywhere.  According to him this town is very different from Sydney where the cultures are placed into small pockets.  Here it is free flowing.

The conversation prompted me to walk through Melbourne back home rather then take the train and it is indeed true this city is a veritable melting pot of different cultures.  I found 2 story comics shops, 3 alternative goth clothing stores I would definitely have to go in, several high end Gucci-like stores, and then the food was all over the place in as much variety as in Auckland.
​