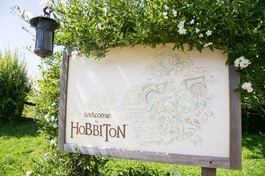 Image Credit: SeekTheWorld.com
Our first day out of Auckland as a class and we are simply heading directly down the middle of the map, through Lake Taupo and into Wellington.  This will be a 2 day trip stopping in a few media related areas along the way, most notably HOBBITON!

Hobbiton
Hobbiton is the movie set for the Shire in the Lord of the Rings trilogy and the Hobbit films that have made New Zealand insanely famous.  The film directed by Peter Jackson required a rather large plot of land in the back of a farmer’s plot in the middle of the north island and involved quite a bit of construction.  After a bit of history the farmer whose land the set was on opted to make it a tourist attraction and officially asked that the set remain permanently built after the Hobbit movies were filmed.

Throughout the tour a Colorado native spoke to us about the actor’s and directors challenges filming the space and the use of multiple sets of different sizes being built to ensure hobbits would look small on the films.  After all of the fantastic film nerddom we were treated with a fantastic taste of ale in the actual Green Dragon bar they have made into a functional space!   I bought myself a South Farthing Cider for the welcome home party when I got home which, of course, was hobbit themed.

Lake Taupo
We ended the night about half way between Auckland and Wellington at the peak of the north island's middle mountain range - Taupo.  As we came in it reminded me heavily of the mountainous towns in Colorado such as Steamboat.  It was certainly a hiking town and it seemed so very touristy.  The lake was indeed quite massive in the middle of the island and the sunset gleaned nicely over it.  A place I would highly recommend as a get-away from the hecticness of life – something the kiwis happen to use it for as well.